“Corporate funding in 9M 2022 is behind pace year-over-year, impacted by inflation and high-interest rates but is still ahead compared to the previous six years. There is renewed momentum after the passing of the Inflation Reduction Act. We have seen a resurgence in VC and private equity funding, breaking funding records since 2010. There is no longer any doubt about the growth potential of the solar industry – it is now a race to acquire the right technology and portfolios to scale,” said Raj Prabhu, CEO of Mercom Capital Group.

To get the report, visit: https://tinyurl.com/MercomSolarQ32022 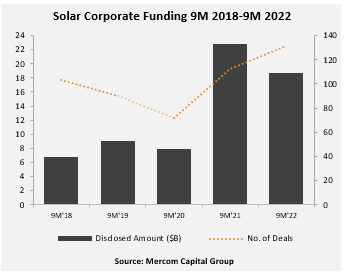 There are 227 companies and investors covered in this report. It is 100 pages long and contains 84 charts and tables.

To learn more about the report, visit: https://tinyurl.com/MercomSolarQ32022