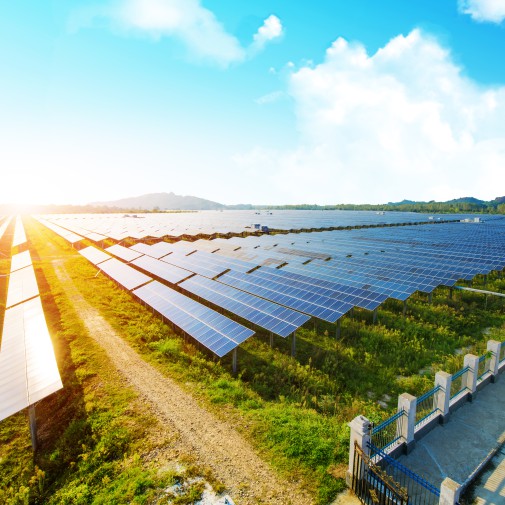 Below is a chart with the top 10 global large-scale (utility-scale) solar PV developers, based on projects in operation, under construction, and awarded. In developing this global leader report, a key criterion for qualification was that developers had to have projects in at least two countries. Although there were several developers, like NextEra Energy, that would have made the list based on their portfolio size; they were only active in a single country.

The list of top developers is a diverse group of companies with global growth aspirations. It includes several renewable energy arms of industrial and power conglomerates, subsidiaries of asset management companies, and pure-play renewable and solar companies. Top developers hail from all around the world, including India, China, the United States, Europe, Japan, and Canada.

“Top developers are expanding presence in mature markets in pursuit of policy certainty, steady returns, and lower risk. They are also chasing growth in emerging markets, trying to lay the groundwork and tap into the enormous future potential these regions represent, despite the risks and ultra-competitive auctions,” said Raj Prabhu, CEO of Mercom Capital Group.

In terms of under construction and awarded capacity, Adani Green came out on top with 10.1 GW of projects. SB Energy was the second-largest player with 3.4 GW, followed by Invenergy.

The large-scale solar development market is extremely fluid, with project portfolios continually churning. Several of the companies included in this report were in the middle of M&A transactions at the time of publication. Attractive projects are in great demand, especially in mature markets.

M&A activity for large-scale solar projects has been extremely active. According to Mercom’s 2019 Solar Funding and M&A Report, about 26 GW of projects changed hands in 2019. In the last ten years, over 120 GW of large solar projects have been acquired. Developers are recycling capital to invest in new projects and realize quicker returns.

We are seeing large-scale solar auctions around the world, and they are now the primary mode of procurement. Costs are dropping continually, driving demand, and solar is now the cheapest source of energy in many parts of the world.