“A strong fourth quarter pushed overall funding higher in 2017. Higher installation levels around the world, the lack of threat to the solar investment tax credit, lower than expected tariff recommendation by U.S. ITC, strong debt financing activity, and over a billion dollars in securitization deals helped the solar industry have a much better year in terms of financial activity compared to 2016. After several challenging years, most of the solar securities were up in 2017 reflecting overall positive sentiments around the solar industry even as several Chinese manufacturers decided to go private. Of course, all this could change swiftly if President Trump decides to impose higher tariffs in the trade case,” commented Raj Prabhu, CEO and Co-Founder of Mercom Capital Group. Public market financing was flat in 2017 to $1.7 billion raised in 33 deals from $1.8 billion raised in 27 deals in 2016. Three IPOs were logged during the year that raised a combined total of $363 million for Canadian Solar Infrastructure Fund, New Energy Solar Fund, and Clenergy.

$2.4 billion was raised by 16 residential and commercial solar project funds in 2017 which was down 50 percent compared to $4.9 billion raised by 30 funds in 2016. The top fundraisers were: Sunlight Financial, Sunnova, Solar Mosaic, SolarCity, and Spruce Finance. Since 2009, solar residential and commercial firms offering leases, PPAs, and loans have raised more than $24.8 billion in lease and loan funds. 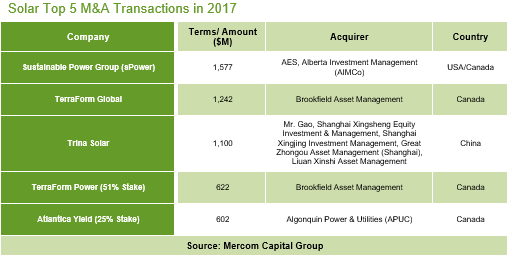