To learn more about the report, visit: https://mercom.wpengine.com/product/q2-2017-healthcare-digital-health-funding-ma-report/

The Digital Health sector has now received $22.5 billion in the 3,031 VC funding deals Mercom has tracked since 2010. 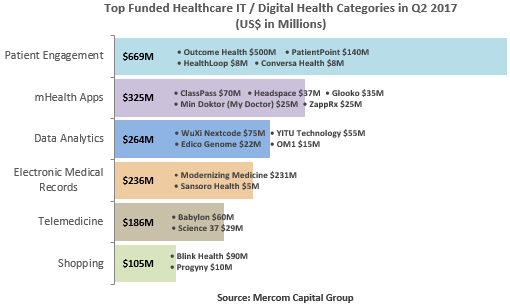 There were 68 early stage deals in Q2 2017, including two accelerator and incubator deals. Practice Management Solutions and Data Analytics companies were involved in the most M&A transactions in Q2 2017 with five each, followed by Medical Imaging companies with three transactions. This report is 102 pages in length, contains 66 charts, graphs and tables, and covers 732 investors and companies.

To learn more about the report, visit: https://mercom.wpengine.com/product/q2-2017-healthcare-digital-health-funding-ma-report/